Impact of COVID-19 on National flower of South Africa

Protea cynaroides, the National flower of South Africa comes in many colours and sizes.   The demand for these and other Proteaceae has been increasing for several years now, but due to COVID-19, sales have come to a standstill. For the white cynaroides ‘Arctic Ice’, for example, a cultivar managed by Future Fynbos under the Ayoba® brand, 180,000 stems are planned to be produced in 2020 of which around 72,000 stems (40 percent) will be flowering the first season, which is April/May. However, due to the extreme restrictions as a result of COVID-19, approximately 15,000 stems have had to be thrown away so far. But the Ayoba® flower growers remain hopeful that some of the May flowers can still reach the markets and that the situation will be normalised around their main flower season which starts in September, enabling them to bring their flowers to the global market again.

Increasing production ‘Arctic Ice’
‘Arctic Ice’ is a white cynaroides and has been produced from South Africa over the past 6 years now. Volumes started out with the first small productions from 3.5 hectares in 2014.  Productions have almost doubled every year over the past three years.  “Growers of ‘Arctic Ice’ are very patient as it takes longer than 24 months from pruning to harvesting a flower. Plants are also not high yielding with a maximum of 5 -10 flowers being produced per mature plant.  The flowers are well received as the demand is increasing year on year.”, explains Caroline O’Brien , Managing Director at Future Fynbos. The main production time from South Africa is April/May with a second and main peak in September/October. Flowers are mostly exported from South Africa to Europe, Russia and the East (PPECB statistics). 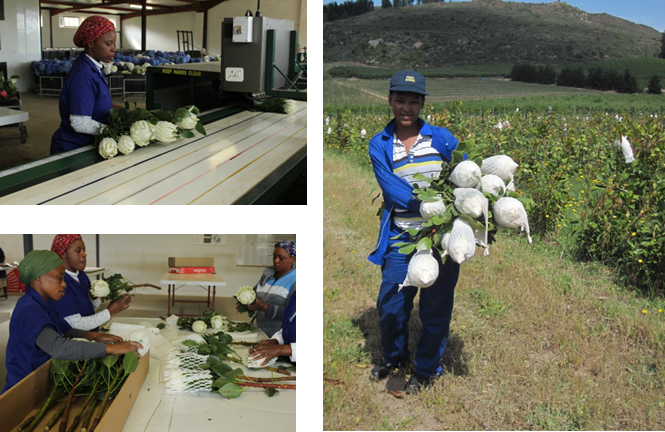 Lockdown affecting supply
South Africa has been under extreme lock down conditions since midnight on 26 March 2020, as a state of emergency was declared. This has impacted the growers severely. “With only the sale of essential items taking place, as well as limited flights and restrictions on what farming operations may take place, growers have been unable to sell these beautiful flowers. Flowers which have taken over 2 years to grow their tall stems and large flowers are having to be left on the plants or thrown away. To date, approximately 15,000 stems have been thrown away.”
Fortunately, some flowers could still fulfil their job and brighten up someone’s day. “One of our Ayoba® licenced growers managed to distribute flowers to an old age home during this period and brought great joy to its residents.”  Priceless is the picture of Yvone Byford at Amber Valley home being handed a beautiful ‘Arctic Ice’ by her much appreciated carer Gugu Phungula.  (Pictures courtesy of Zuluflora and Amber Valley Home).

Hopeful
Despite the challenging times, Ayoba® flower growers remain hopeful. “They hope that some of the May flowers will be able to reach the markets and that by their main flower season which starts around September that flights, distribution channels as well as markets will have resumed so that these magnificent flowers can be used globally once again to create hope and joy.”